Ventifacts begins the year Christine Hume’s daughter develops a wind phobia, but quickly blows into lyric investigations of the wind in art, politics, and literature, highlighting the currents between imaginary relations and physical conditions.

The main force in this book is the language. The wind blows through each sentence in this book. It isn’t so much what Hume says, but how she says it. The wind is an ancient study, she writes: “It used to be the realm of the ancient gods, but now our weather reports reflect regional ontologies” (22). But Hume has found a way to make it new. She makes the wind omnipresent, both physically and intellectually: “Take the shape of music: chimes, bells, Aeolian harp, the natural minor key. All the rushes whisper at once when the wind blows through. Wind is the first music, a soundscape for the ecosystem” (31). She also brings the wind close to the reader. By finding a way, with words, to describe so clearly and precisely the movement, sound, and impact of the wind she makes it beautiful to the reader as well: “Up close, its helmet of harsh vowels whispers too close to decipher; from the other side of the field, its rustle beckons, sometimes lifts into a zeroing whistle” (17). Through sensual imagery and exacting language, Hume has found a way to make the ancient new and thrilling.

Hume skillfully interweaves her wind artifacts that are at times informative, factual, philosophical, literary, speculative, poetic, and always open to wonder. “The iconography of wind translates spaces into powerful fictions and futures,” the author writes. So does Ventifacts.

Ventifacts moves much the way that wind does—invisibly, winding around and across the borders of various subjects, making itself known through the physical evidence left behind: questions, memories, theories, stories, sounds, figures and facts. The name alludes to the book’s form, short pieces of prose that are remnants of thought. Hume sketches out a broad understanding of wind’s movement across culture and time, in climatology, government, health issues, themes in literature, mythology, philosophy, etymology, art. This is a book whose thinking lends itself to accumulate feelings.

What impresses me most about this chapbook is its ability to shift and swirl, its breadth and breath. Hume has managed to use the solid, bottled form of prose and contain within it the dynamism of wind. The deceptive prose wrapping of Hume’s chapbook hides within it the whorl of poetic and scientific reflection. It is shaped in paragraphs, yes, but within those paragraphs lie poetry, memoir, essay. It reminds me of the commercial by General Electric, where a little boy captures wind in a bottle and uses it to blow out the candles on his grandfather’s cake. 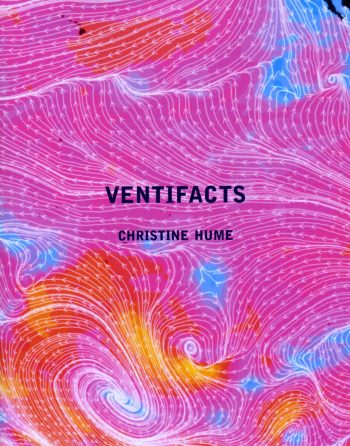